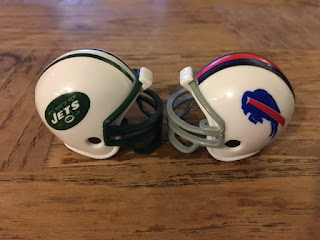 The Jets have effectively gutted their roster resulting in what is arguably the most talent-depleted group in the NFL. It's become apparent that General Manager Mike Maccagnan is employing a tanking strategy more commonly seen in the NBA. As a result, the 2017 season will be nothing more than a wash for the Jets begging the question: if Maccagnan could just hit the fast forward button and jump right to the offseason would he? I think he would. And you know what's really messed up about that? It means he would miss his daughter's birthday! What kind of a sick bastard would put his job above his child like that? Shame on you. You deserve this beating that Nathan Peterman is about to lay down on you. Wait a minute, who the hell is Nathan Peterman? Oh well. 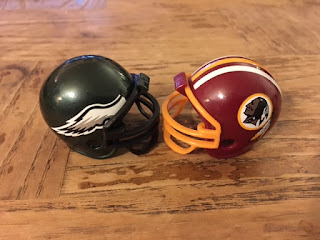 It's only Week 1 and right out of the gates we've got a rivalry game on our hands. Yeah it feels like these two teams have been going at each other for almost as long as I've been writing about football. Oh ... huh. Well I just checked and apparently these teams first played each other in 1934, so um, much longer than I've been writing about football. But c'mon, like you remember an Eagles/Skins game from before 2009. Oh shut up, you're so full of it. Philly started hot last season so I'm tempted to pick them here. But if we're talking tempting you can't rule out Kirk Cousins' crystal blue eyes. It's a toss-up as far as I'm concerned, just like in the olden days of 2009. 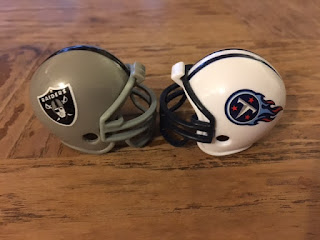 Look, we just covered the fact that it's only Week 1, but folks I think we're dealing with a 3P (Possible Playoff Preview) here. In fact, I predicted as much in my season preview. There I called for a Raiders victory in January, but something tells me that the Titans will come out strong at home and get this win. And that something is Pickler, a score-picking goblin whom I call upon once a week to assist me with a tough game. Keep an eye out for Pickler's Game of the Week all season. 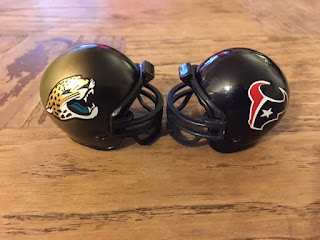 Obviously the people of Houston have been through hell over the past couple weeks, and hopefully this home game can bring them at least a small distraction from the turmoil. And heck, it would probably make them feel even better to get a win. Enter the Jacksonville Jaguars. You can almost imagine the Jags alleviating the tensions of the weary region by saying, "Take a load off folks, we got this," and then proceeding to lose 27-6. Ya know, for the good of the nation ... and because they're the Jags.
Texans 27-6 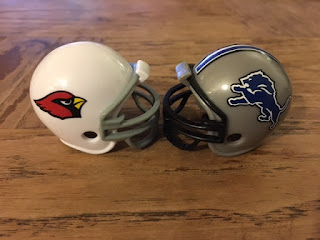 Hold on to your stinky little butts because we've got ourselves an inter-divisional match-up with first place in the NFC on the line! Well what? It's true. Whoever wins this game will have the best record in the NFC and be in the conference driver's seat. Of course, they'll have to share that seat with about seven other teams, resulting in extremely dangerous driving conditions. In other words, the victor should be very careful. Alright, I think I've fully exhausted that metaphor. Speaking of exhausted, I'm already tired of the Lions new uniforms. They're Snooze City baby, and I ain't got time for 'em. If that's not a reason to pick against them I don't know what is. I guess I should do more research ... 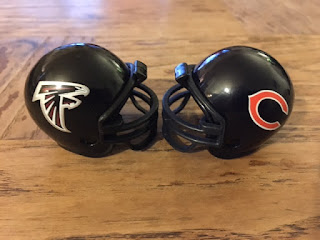 Heeeeey Falcons, how ya guys doing? You look rested. It's good to see you out and about! I know I should have called, but I was trying to give you your space. Seriously though, we were all thinking of you, and we knew you'd pull through. Ok, well I just wanted to say hey, and tell you to hang in there champ. Oh my god, I'm SO sorry, it just slipped out.
Falcons 28-3 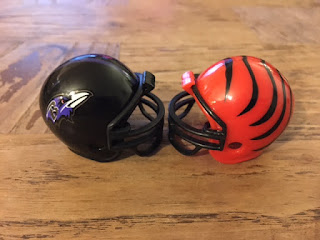 This game reminds me a lot of my favorite movie of the summer: Dunkirk. Two fierce rivals doing battle in America's heartland. But this is merely a football game, so don't expect any flaming blimps or Kevin Costner cameos in this one. No, we won't see anything reminiscent of Dunkirk's classic banana prank scene or the sword fight in the church, but what we should have is a very competitive division battle. Can I be honest with you guys? I never saw Dunkirk.
Ravens 23-20 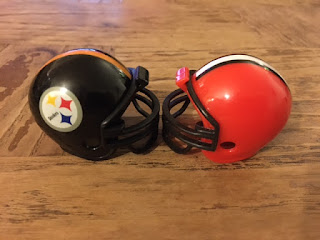 The brightest spot for the Browns this season is expected to be #1 overall pick Myles Garrett. However, he's suddenly sidelined with a high ankle sprain, so Clevelanders are left searching for other silver linings. Here are some suggestions: Brock Osweiler is no longer on the roster; the Indians have won 15 in a row; you'll actually be watching a live football game rather than just staring at an empty field, which is what a reported 12,000 Browns fans have been doing at FirstEnergy Stadium since last December. As for non-sliver linings (brown linings?), after Cleveland cut star CB Joe Haden last week he immediately signed with the rival Steelers, and you just KNOW he's gonna want revenge against Deshone Kizer, a guy he probably met a couple times. Look for the Browns to not win.
Steelers 31-13 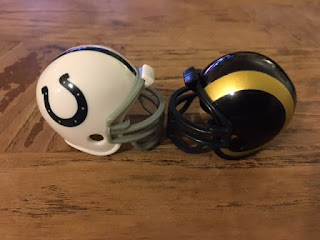 When the schedule was released this looked like a possibly intriguing QB match-up of former #1 picks. Then Andrew Luck's injury continued to linger, leaving the Colts with Scott Tolzien as their starter. Meanwhile, the other #1 pick is healthy, but he's also Jared Goff. In other words, this one could be a real stinker. As if the nation's interest wasn't flagging enough, Aaron Donald won't be in action due to a contract holdout. Look, I already said it would be a stinker, you didn't have to throw any extra stank on there. But ya did, didn't ya you twisted perv? 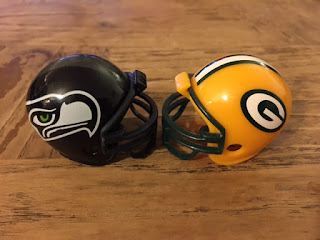 Two of the top teams in the NFC meet at Lambeau Field. In fact, they'll do more than just meet, they'll play each other in an NFL-sanctioned football game. At least that's what we've been told, you never can know for certain until you see that first kickoff go flying. Remember that Dolphins/Ravens game years ago when all the players just hung out on the field? Man what a let down that was. And why did CBS stay with the broadcast for the full 3 hours? While these teams are plenty familiar with each other, having played four times in the last three seasons, I highly doubt we'll see a chill sesh come Sunday. In fact, we're gonna get hot, fiery action. That will result in a short delay, but once they put out said fire the game will continue and be quite entertaining.
Seahawks 24-19 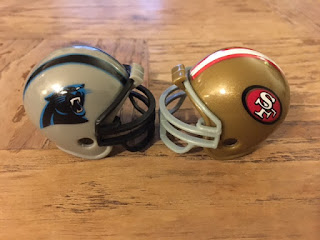 This past offseason the 49ers' staff underwent an overhaul with the hiring of a new head coach and general manager in Kyle Shannahan and John Lynch, respectively. But ironically, this new era doesn't involve a Kaep. (Yes, I am happy with that one) While the early returns have been mostly positive for San Fran's new regime, the real football begins now with a visit from Cam Newton and the Panthers. It's safe to say the gravity of the situation has increased. And there's no one that knows more about gravity than Newton. (No, I'm not as happy with that one)
Panthers 27-16 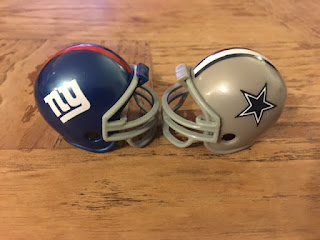 It's a Sunday night game, so you know what that means ... Let's turn over the reins to the man who will call the game, back with HCM for another season, Cris Collinsworth:


Alright, well that wasn't much help. I guess I'll have to handle this one myself.

One aspect of the Ezekiel Elliott scandal that is being overlooked is the fact that the judge who heard Zeke's appeal was named Harold Henderson. Maybe this is a dumb question, but it wasn't the Harold Henderson right? Yeah you're right, that's stupid. But like, he acclimated to human culture pretty rapidly in the short time he lived with the Hendersons; it's not ludicrous to think that in the 30 years since he got educated, went to law school, and rose through the ranks of the legal world to become a judge, right? Nah, that's unbelievable. And yet I still believe it to be true. I also believe in the Giants, who had the Cowboys' number last year and will not sweat the fact that they have to face Elliott even though Bigfoot upheld his suspension. 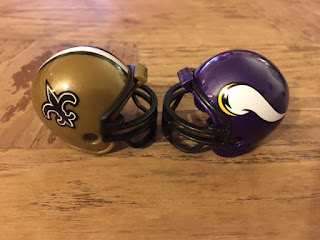 One of the league's top offenses will clash with one of the top defenses when Drew Brees and the Saints' O goes head to head with a stingy Vikings' D. As for when Minnesota has the ball? Well New Orleans can't stop much, but the Vikings do little more than attempt to nickel and dime teams to death with middling levels of success; so expect more short passes than singles' night at a jockey bar. Do jockey bars actually exist? If they don't I'm about to be a rich man. Finally, I can quit the writing biz. Speaking of which, I have noticed that a lot of your donations don't seem to be coming through on my account properly, so just e-mail me directly and I'll inform you where you can send an envelope of cash.
Vikings 23-17 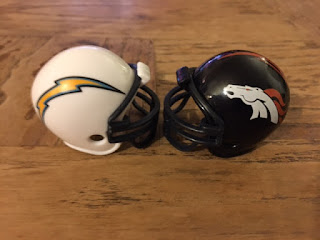 The final game of week 1 is the first for the newly rechristened Los Angeles Chargers. In case you forgot, or are unaware, the Chargers played their inaugural season in LA in 1960 before moving down to San Diego after just one year. In other words, it's been 56 years since the Chargers called Los Angeles home, that's longer than Roman Polanski. They'll return to find a bustling metropolis that has nearly completed a comprehensive mass transit system. But first they have a detour in the Mile High City, and if you know anything about the Denver airport that could result in any number of Illuminati/other-worldly influences. Despite that, I think the Chargers will have enough energy to pull off a mild upset before returning home to the realization that they're borrowing a stadium from an MLS team.
Chargers 24-22