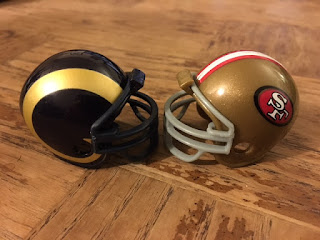 This game features the highest scoring team in the NFC (Rams) against the lowest scoring team in the NFC (Niners). It doesn't take a rocket scientist to figure out how this one is going to go. In fact, if we did ask a rocket scientist he'd probably go on about how (read in a nerd voice), "The oblong spheroid shape of the football, or 'pigskin' as enthusiasts are wont to refer to it, allows for any number of random bounces within the allotted 60 minutes of game time that any prediction made with confidence is a rather foolhardy endeavor." Then I'd say, "Can it dweeb, I know pigskin!" Then he'd probably say something like, "Please leave my doorstep."