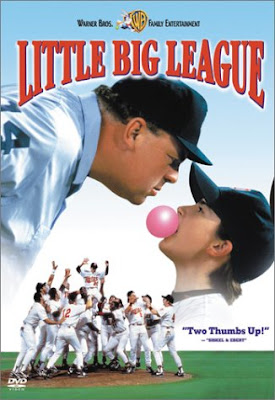 I like this movie. The Mariner stuff was obviously a nice surprise, and Erik will do a better job of summarizing why this is a fun movie after the jump (YES! Such a blogger). I guess my biggest gripe was the main character. Just seems like a little d-bag. Anyway here's Erik's take...

Erik: " Ok, so I'm pretty sure my vote is the reason that this is where it is on the list, but I will make no apologies, this movie is great. The baseball scenes and discussion are surprisingly accurate and realistic. Of course, you have to look past the fact that it features a fairly annoying 12 year-old as a manager/owner of the Minnesota Twins. You get some good performances from greats such as Jason Robards, Dennis Farina, Timothy Busfield, and Jonathan Silverman. But obviously the best part of this movie is the one-game playoff between the Twins and the evil Seattle Mariners. Griffey dominates despite getting grifted by a hidden ball ruse and the Unit comes in to nail it down in a rare relief appearance. Now let's consider the fact that this movie came out in 1994. It was astonishingly prophetic when it comes to the M's '95 season. A one-game playoff, RJ coming in from the 'pen at some point (not in the playoff game, but close enough), and Junior just tearing shit up. I remember seeing this in the theater, there was audible snickering when it was revealed that the Mariners were in the playoff game, little did they know .... little .... did ..... they ..........know.

(I also want to say that there some cheers when the Mariners won at the end, but I can't say for sure. I remember being pretty excited though.)"

(Begin typing here for after the break) And here is the rest of it.