I'm sure you've heard... but Manny and Papi cheated! Most people/analysts/talking heads are at the "who cares, everybody cheated" point of this whole PED & steroid mess.

Well FRACK THAT!!!! I'll tell you one guy never cheated, and it'll never come out that he did... 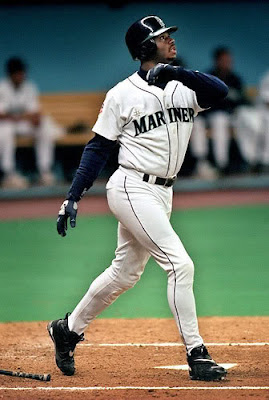 I'll stake my entire blogging reputation on the fact that this dude is, was, and always will be clean!

I love every new name that comes out (one would or two would break my heart, but we won't talk about that here), cuz the more names that are leaked, the better and better Junior becomes.

You know what's pretty crazy to think about? All the criticisms that have plagued Griffey for his career... the lack of working out... the injuries... the slow recovery time... those same points that his detractors used as ammo? Well, they'll be the same reasons Griffey will be remembered as the greatest of our generation!! They PROVE he was never on steroids!

Dudes are all yoked out? They're on juice.

Junior never worked out a day in his life!

Guys are coming back form injuries quicker and stronger? PEDS!!!

Not Griffey! He's hurt all the time!

Players are having career seasons late in their career?

We should feel pretty lucky as sports fans. Sure the M's may never win the World Series... but we'll all be able to see we saw the greatest player of our generation. LEGIT! 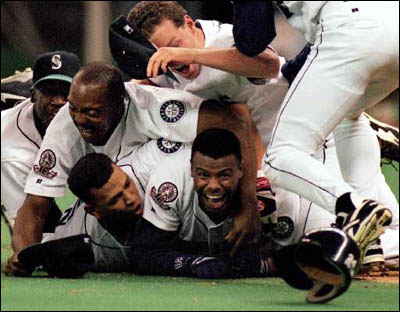 I was flying back from Seattle to NYC last month and I had the pleasure of talking with a 60 something Swiss diamond and Rolex importer (let me tell you he wore far too much gold). This guy was a die-hard Yankees fan. The topic of steroids came up, and this guy was going on an on abot how it broke his heart and that he could never look at the 80s-2000s as relevant to the greats from the past.

Then, out of the blue, he says, "I'll tell you one guy that I promise you was never on drugs. Ken Griffey Jr. Best player of a generation."

I think that bottom picture is of an actual steroid injection into Griffey.

perhaps the greatest bit of writing this website has ever seen. everytime i have seen this old man hit a homerun this year i get legitimately excited. without question the best of our generation.