How I Became Kwame Brown's #1 (and only) Fan

In the "He Got Game" post there was a call for me to re-tell my Kwame Brown story in print form, so here it is. For those of you that have already heard it, hopefully it's worth hearing again; not to mention, this version comes with bonus pictures! But hey, enough of my yackin', whaddaya say, let's boogie!

January 10, 2007: It's a Tuesday night, a new semester has started, and a precocious youngster is about to become a man. It was the night of my 21st birthday. Being the law-abiding citizen that I am, I never purchased a fake ID, so this was my first night going out to the bars. I was good and hammered by the time I showed up to a bar in Manhattan Beach, Ca. We were having a decent time, and I was wracking up quite a few free beverages. At about 1:00 AM I overheard someone remark "Yeah, one of the Lakers is here." I scanned the bar to see who exactly they were referring to, sure enough it was the one and only Kwame Brown. I thought to myself, "Well that's lame, it's just Kwame." Then I thought, "How hilarious would it be to talk to Kwame Brown?" At this point, there are some differing reports. I seem to remember just walking up and talking to him, others say that I went into the bathroom and came out talking to him, either way a conversation had begun.

I was introduced to Kwame's "cousin" who asked me what we were up to. When I told him it was my 21st birthday he asked me how many drinks I had had. At this point I had no clue (only pussies count right?) so I told him 15. I continue to talk to Kwame for a couple of minutes about God knows what until the cousin taps me on the shoulder and says, "This should make an even 21." I turn to see 6 shots of tequila waiting on the bar. Keep in mind it was a good half hour after last call, so that tells you the kind of clout that Kwame's got. I know a few things when I see the shots:

By now, my friends and Kwame Brown have gathered around so I have no choice but to step up to the bar. As I do, the bar tender points out the waste basket below me, assuming as I did that this would end messy. I started throwing the shots back, trying to get them down as quickly as possible. I was later told that I paused for a few seconds in between shots 3 and 4 took a deep breath and continued. I completed the remaining shots and made a bee-line for the bathroom, I knew I couldn't let Kwame see me like this: 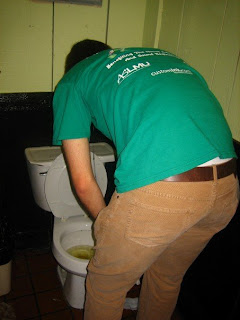 Note: This is the actual picture.

When I returned I figured that because he bought me shots Kwame and I were good buddies. I asked him if he really liked Kobe, to which he said yes, to which I said, "Come on, seriously though, you probably hate him right?" He stuck to his guns. Then I said:

I then layed out my thesis to him about why Ray Allen was cooler than Kobe Bryant, with my main argument being the sex scene with Rosario Dawson in "He Got Game." I believe it went something like this:

Me: You've seen He Got Game?
Kwame: Yeah
Me: Has Kobe ever grabbed Rosario Dawson's tits?
Kwame shakes his head no.
Me: Well, Ray Allen grabbed those tits.

At some point the following picture was taken to commemorate the night (apparently my breath reeked from the earlier puke sesh because Kwame's discreetly plugging his nose): 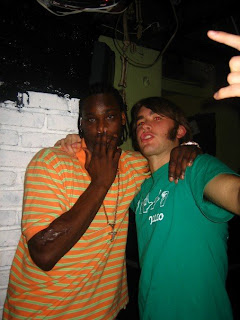 When all was said and done I think I'd talked to him for a good 20-30 minutes, not that he had done much talking. After that I decided this Kwame Brown guy, although widely despised by most sports fans, is alright by me. You're the best Kwams, I love ya buddy.
Posted by Erik at 12:03 PM

Hey, I'M a Kwame Brown fan. I remember his name coming up in multiple trade proposals to the Sonics and I always wanted to go for it. He seems like the type of player who would thrive being out of the spotlight.

Plus, his career really isn't his fault. It's the gambling addict dick-head Michael Jordan's. Seriously I hate Air. Fuck him.
He ruined this kid's career. Screw you Jordan.

You stood pretty tall over that toilet, I feel bad for the girl that goes to squat there next. I assume you drunkenly went into the ladies room, right?

Just noticed that the seat is up. You are quite the considerate gentleman.

This is epic. Really any guy that is cool with hanging with a wasted 21-run kid is alright by me. I don't think I would be cool like that, I'd be pissed and annoyed.

Did you happen to pee yourself or fall through a table after your friends abandoned you later in the night?

I resent that Pervitron. I helped carry you home from that bar... and I suggested MULTIPLE times that we take you to the hospital... AND I stayed and watched you puke up THICK frothy orange puke on the front lawn.

Yeah, he was probably more in the 6'9" range. I think he was there to hit on college chicks so he could get into the 69 range.