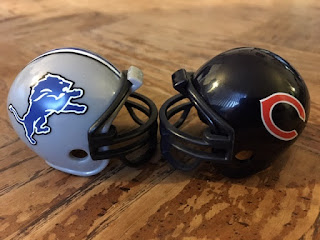 This is the first matchup of the season between these division rivals, but they’ll be playing again on Thanksgiving. Isn’t Thanksgiving a time for reunions? To get together with family members you maybe haven’t seen all year? What’s the point if you just saw each other 12 days ago? These teams will have nothing to trash talk about. They’ll already have used up their best material. It’s just going to be awkward. Also uncomfortable for the Lions is that they could currently be in the middle of a 6 game losing streak. This would be their third L in a row, and with the Panthers, Bears (again), and Rams upcoming, Detroit could be sitting at 3-9 a month from now. Which will make it really unpleasant at holiday functions when their family asks, “So how’s work going?” 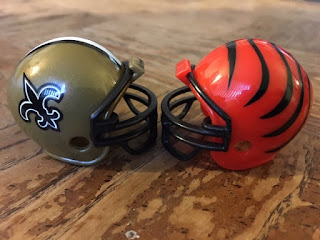 After a big win over the Rams last Sunday the Saints have cemented themselves as a major Super Bowl contender. At this point I’m not sure what, if anything, could derail them. What’s that? They’ve signed Dez Bryant? Aaaaand season derailed. Look, I’m not saying that Bryant is a locker room cancer; he’s more of an infection that causes inflammation and spews pus. I assumed that New Orleans learned their lesson last season when they tried to shoe horn a temperamental veteran into their offense and the Adrian Peterson signing turned into a disaster. But now I guess it’s time to get the shoe horn out again ... but where did they leave it? Hope the kids didn’t use it as an ice cream scoop again, Sean Payton wound up with a rare case of mouth gout. Ah, look at that, it was in the shoes the whole time! Dez probably won't yet be integrated into the offense enough to screw things up this week against a Bengals team missing A.J. Green. 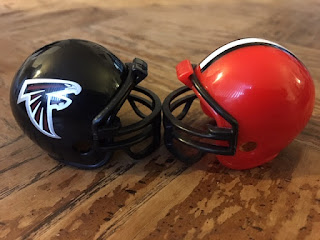 Atlanta has hit the cushy part of their schedule and they are taking advantage of it. Like probably too much so. Pretty gross Falcons. And now they’re going to march into Cleveland and convince these sweet little Browns that they just want to play a friendly game of football only to blow them out and leave the Browns in the dust; a single parent left to raise this kid on their own. This is just what Cleveland’s mother told them would happen if they let themselves be coerced by smooth-talkers like Matt Ryan and his cohorts. But do the Falcons care? Nah, the Browns’ problems aren’t theres after Sunday. For Atlanta this is just a fling before they go back home to play the Cowboys. But for the Browns the consequences will last a lifetime. 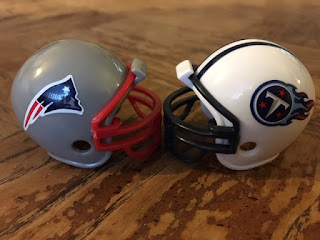 There’s reason for the Titans to be somewhat optimistic heading into this game. The last time a defensive disciple of Bill Belichick faced the Patriots Matt Patricia led the Lions to a 26-10 win in which New England only totaled 209 yards. Unfortunately for Tennessee Matt Patricia was actually Belichick’s defensive coordinator, whereas Titans coach Mike Vrabel only played for him. So on second thought maybe Tennessee doesn’t have much of an advantage. If the Patriots insert any of their linebackers at tight end Vrabel will be all over it; other than that though the Titans might be screwed. This basically amounts to an elimination game in the AFC South. Both teams enter the contest at 3-5, with Houston, the division leader, on their bye week at 6-3. Whoever loses here might as well pack it in, whereas the winner might as well start winning a majority of their remaining games, otherwise they’ll be packing it in soon as well. The Colts are trending upwards, having won two in a row, and with five games within their division left on the schedule. So the opportunity, and perhaps the ability, is there. But I didn’t pick Indy to make the Super Bowl, I picked the Jags to make the Super Bowl. I doubt you remembered that, so I probably shouldn’t have brought it up, but it haunts me on a weekly basis, and I fear that I won’t be able to move past it until I address it in public (not that this blog that reaches a dozen people should count as public, but hey, it’s all I got). So I’ll pick Jacksonville, because they wouldn’t want to make me look like an idiot again would they? 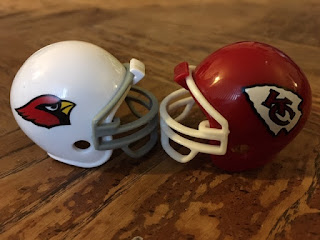 The Cardinals have only won two games this season. Both of those were against the San Francisco 49ers (and without wunderkind Nick Mullens at quarterback for SF). Their opponent this Sunday is the Kansas City Chiefs, a team that, by all indications, appears to be far superior to the 49ers. Basically the only way the Chiefs will lose this game is if they sleepwalk through it. And I don’t mean unfocused and just going through the motions, they’ll still win if that’s the case. I’m saying they’d literally have to be sleepwalking to lose this game. Every last player on the roster stumbling around, going all different directions, and peeing in the equipment chest. Even then I’d only say Cards by 3. 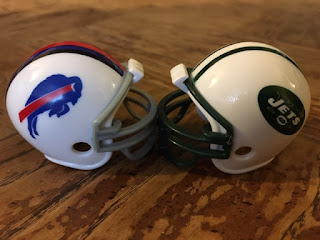 Last Sunday the Bills started Nathan Peterman again in a move that can only be described as irresponsible. Peterman threw for 189 yards on 49(!) passes. Sure the 3.9 yards per attempt is astonishing, but even more worrisome is that the Buffalo coaching staff allowed Peterman to throw the ball 49 times in an NFL game. And yet even more shocking was that of those 49 passes only 3 were intercepted. That’s gotta be considered a win for Peterman. It definitely wasn’t a win for his team though, they lost badly. The Bills are now 2-7 and have only scored 96 points on the season. They’d be the prime candidate for the top pick in the 2019 draft if not for the existence of the Raiders, whose 1 win currently has Buffalo boxed out. But if Josh Allen remains sidelined and the Bills continue to start Peterman there’s no end to the possibilities! Well I guess 2-14 would be the end, but they’d get there in spectacular fashion. 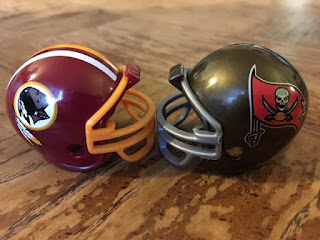 It’s your favorite moment of the week (and I’m not talking about when your Boboli comes out of the oven every Friday night), it’s time for the Ryan Fitzpatrick MVP watch. Last week Fitz fell behind by 28 points in Carolina only to rally his team to within a touchdown and end up with a 42-28 loss. So you know what, I’d say he is the MVP of the league right now, most volatile player! He’s down by 30 one second, he’s tied the next, he’s all over the place, what an asshole! And I can’t get enough of it. This one could be a challenge for Fitz, Washington skews towards a more conservative, run-based offense that often lends itself to low-scoring games, but if there’s one man that can rope them into a shootout it’s the MVP of the NFL Ryan Fitzpatrick. 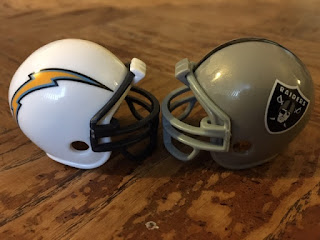 The Raiders’ 34-3 loss in San Francisco last Thursday solidified them as the worst team in the NFL. But isn’t this exactly what Jon Gruden wants? If you’re doing a rebuild you might as well burn it all down before you start, right? That’s what I’ve done with multiple businesses. The problem I ran into was that I didn’t own those businesses. That isn’t an issue for Gruden, he has total autonomy and can drive his team into the ground for as long as he pleases. Eventually, once they deploy their many high draft picks and cap space the results will need to change, but for the time being Gruden will be more than content to watch his team lose out while pretending to be flabbergasted on the sidelines. 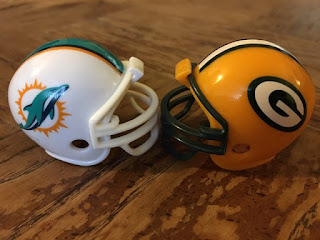 As we discussed a few weeks ago, the Packers are in the midst of a torturous stretch of their schedule, and with this being the easiest of the bunch they really need a win here. The Dolphins would probably counter by saying, “Oh and we don’t?!?” To which I would respond, "Wow thanks for reading! That’s so cool that your whole team follows this blog! But no Dolphins, you don’t need to win this game. You still get to play the Bills twice. Also, shut up, you’re the Dolphins, do you really think you should be in the playoffs? Again though, thank you so much for reading, I am truly honored. But seriously, shut up." 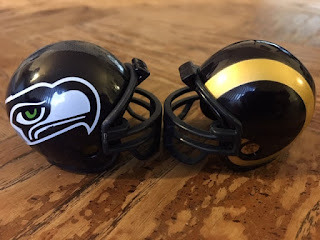 The Rams do not appear as unbeatable as they once did. I’m basing this on the fact that they were beaten in New Orleans last week. But even before LA suffered their first loss of the season four of their previous five wins were by a margin of 7 or less. Of course they were still winning those games, so it wasn’t necessarily a cause for concern at the time. But now that they’ve lost? You guessed it, the Rams are in full-blown panic mode. The sky is falling and I wouldn’t be surprised to see them simply punt on the rest of the season and start regrouping for 2019. The Seahawks, on the other hand, are still in the playoff hunt in the NFC and need a win here to keep pace. Look for them to do just that. 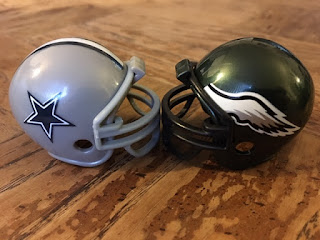 After a dismal showing on Monday Night Football the Cowboys are right back where they belong on prime time. Can they overcome their own misfortunes and a short week to beat a well-rested Eagles team? Probably not, but let's hear what NBC analyst Cris Collinsworth has to say:
Crazy like a fox CC. 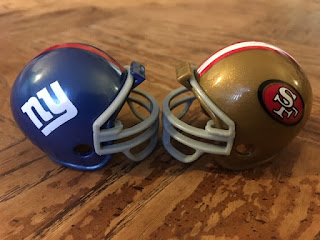 This is the second straight week the 49ers have played in a prime time game against a 1 win team. And in case you were caught up in the Nick Mullens hysteria and forgot, San Francisco’s record is 2-7. In other words we could really use another no name quarterback having an historically great debut to add some juice to this game. And I’ve got just the guy: Alex Tanney. He’s currently number two on the Giants’ depth chart, he’s never started an NFL game, he hasn’t even played in one since 2015, and he went to Monmouth. He’s the perfect candidate! I’m not saying I want Eli Manning to suffer an injury in practice this week, but if he eats some suspect seafood Sunday night in San Francisco and comes down with a case of the runs (ironic for such an immobile QB) on game day we could have a heck of a story on our hands.