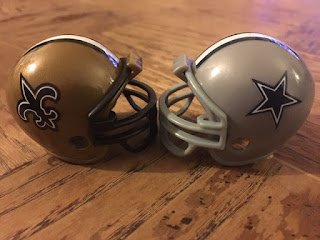 It’s one week later and we’re looking at two Thanksgiving winners. That’s more than I can say for the turkeys! But seriously folks, I’m just pulling your leg ... kind of like I did to the turkey on Thanksgiving! You know I’m coming for that drumstick. Christmas may be a month away, but you can call me the little drummer boy, rat-a-tat-tat. Yes some people at the dinner table get upset when I take both legs from the turkey, but sometimes if you know what you want ya gotta be greedy. That’s a lot like the Saints offense, they’re snatching up all the points and leaving none for anybody else. Sure the Cowboys have won three in a row, but they’re going to have get their dark meat somewhere else because New Orleans is grabbing them legs.