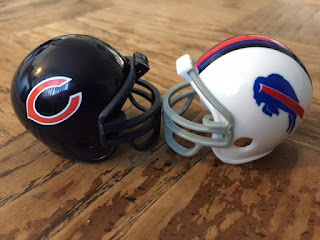 At this point we’ve all seen videos of Bills fans jumping onto, or throwing each other through, flaming tables at their tailgate parties. This week the Bills have apparently decided to recreate those feats on the field. Or at least I assume that that’s their plan. It’s the only explanation for why they would start Nathan Peterman. I understand that injuries have left them with no other choice, but my point is that your only choice should never be Nathan Peterman. He’s simply not an NFL-level quarterback. Yet here we are, headed towards another public shaming of who I assume is just a nice guy that happens to be stuck with a job he’s not suited for. If I were Bills coach Sean McDermott I wouldn’t call for a pass in this game at all. I’m assuming he will though, and that will predictably end in disaster. 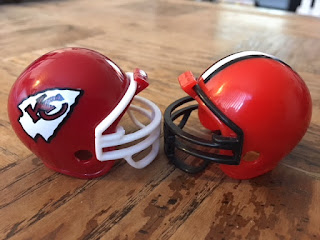 Normally teams are energized by the firing of their head coach. The old guy was lousy, and now you have a chance to start fresh and finish the season strong with the interim boss. Unfortunately for Browns players, their coach for the remainder of the season is Gregg Williams, the dirty bastard who helped orchestrate the Saints’ bounty program and who looks like he should be getting over-served at a golf course bar. When you think about it, Williams becoming Browns head coach was meant to be. He’s bounced around and failed up so many times in his career that it was inevitable he’d make it to Cleveland some day, and that he’d have to fill a power vacuum. My guess is that the Browns will lose the remainder of their games, at which point the Raiders will sign Williams to a 10 year contract to be their defensive coordinator. 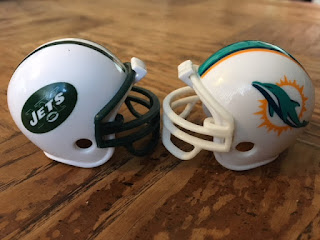 Six teams are on bye this week, unfortunately none of them are the Jets or Dolphins, which means we’re left with this lackluster game. New York has lost five of their last seven and Miami has dropped four of five. Obviously both teams need a win, but it appears they’re also incapable of doing so. A tie may be the safest bet here, but I know that you guys demand a winner. Or at least I assume you do, you never text back. I double-checked and my texts do still work, so I’m not really sure what the problem is. Is it the memes? Ok, I’ll stop sending them. I happen to think that Madea is funny, but whatever, I’ll cut it out. Anyway, I’m picking a winner for you, please just text me to let me know what you think of it. And if you want to include a gif or something, then great, no pressure though. 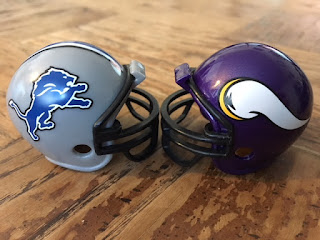 The NFC North is tightly packed, with all four teams within one game of each other. It’s anybody’s division, except for the Lions. Sure they’re in the mix, but they’re also pretty lousy, and I’d be surprised if they ended up any better than 7-9. And I’m a man who’s never been surprised by a lion, Detroit or otherwise. No sir, I have never, not once been surprised by a liAAAAAGGGGGHHHHHH!!! ...
Help me. A lion just mauled me for the last five minutes. He pawed me around in a manner that made it clear he was really enjoying himself. At one point, in an attempt to make it stop I presented myself sexually to him but he wasn’t interested, and he proceeded to claw at me even harder. He just stopped to urinate, so I only have a little bit of time. Send help, here’s my address 4 ... oh God, he’s back, and he’s still urinating. AAAAAGGGHHHHH! 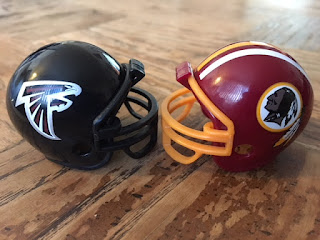 Without looking, which of these teams would you say has the better record? Nope, it’s actually Wa ... oh, you said Washington? So you’ve been paying pretty close attention to the NFL this season, huh? Well would it surprise you to learn that Julio Jones has ... yeah, 0 touchdowns on the year. Ya knew that one too. Ok, how about the fact that Washington is currently #1 in the NFL in the Shipley efficiency rankings, did you know that? Well I made it up! They’re not #1! And there’s no such thing as the Shipley efficiency rankings! I’ve bested you! Sorry, I just had to do it. I’m not quite ready to give up on Atlanta, which means they’ll probably give me good reason to this Sunday. 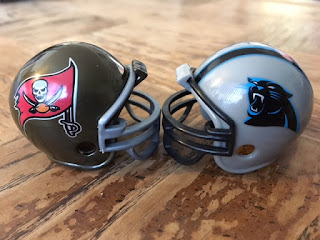 Last week the Bucs fell behind the Bengals 34-16 thanks in large part to Jameis Winston throwing 4 interceptions, one of which was returned for a touchdown. Just when hope was all but lost Tampa turned to the most dynamic weapon in the NFL, Ryan Fitzpatrick. Of course he brought them all the way back to tie the game in the final minutes only for Cincinnati to escape with the win after a last second field goal. It was an undeniable performance that compelled Tampa coach Dirk Koetter to name Fitzpatrick the starter for this game. This is great news for all football fans, but especially you readers, because it means that the Ryan Fitzpatrick MVP watch (not sure if that was always the name, but it is now) is back! Right now I’d say he’s hovering outside he top 10, hovering like a drone waiting to strike. Another stellar, season-saving performance on Sunday in Carolina would make Fitzpatrick the undisputed leader in the MVP race. Some would argue Patrick Mahomes or Todd Gurley are better choices, but those people lack imagination (the ones making the argument, not Mahomes and Gurley, I’m sure they’d give their vote to Fitzpatrick as well). 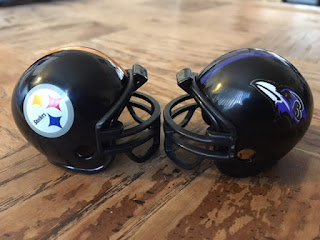 A month ago the Ravens shellacked the Steelers in Pittsburgh. That game proved to be a sign of things that weren’t to come. Since then Baltimore has gone 1-3 and the Steelers haven’t lost. Now they meet again, one smelling like roses and the other weathered by an arduous road, beaten down by the harsh realities of life. These Ravens have seen things the Steelers couldn’t even dream of. Dark, twisted things. The kind of visions that churn men’s stomachs and try their souls. For them football is no longer a game, or a job, it’s an escape. An escape from the past month of horrors. The only moment in their lives when they can forget about football. Wait football is an escape from football? Whoops. This metaphor went up its own ass and came out the other side ... kind of like the Ravens’ last month! 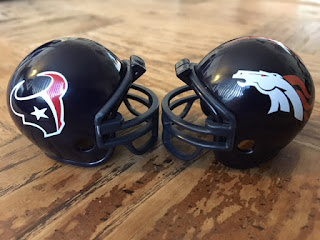 It’s the rarely seen immediate revenge game. Demaryius Thomas was traded from the Broncos to the Texans on Tuesday, and now he takes on his former team this Sunday. Will Thomas really be able to make Denver pay right away though? Odds are he’s not going to have a great grasp of the Houston playbook after only being with the team for four days. So in reality this revenge movie is like if Liam Neeson finally tracked down his daughter’s killer but when it came time to unload on the guy we found out that Neeson only had like a purple belt in martial arts. Sure he still beats him up, but it’s pretty sloppy and unimpressive. He’ll look better in the sequel. 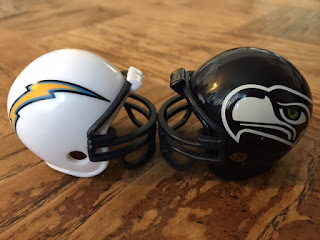 This is a tough road game for the Chargers seeing as how the Seahawks have only lost once in Seattle this year. Wait a minute they’ve only had two home games all season. It’s Week 9, what’s going on here? These guys have been home less than Kevin McCallister’s family, which, if you’ll remember from the Home Alone films, is not very often. Both these squads have winning records, but neither have beat a winning team. Something’s gotta give! Unless the Chargers win and drop the Seahawks to 4-4, then we'll be in the same situation we're in now. I, for one, can not and will not accept such a world. 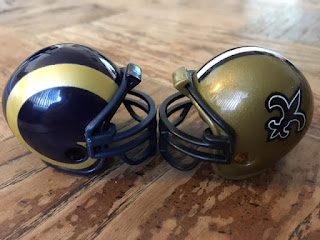 This looks like a big time match-up on paper. These teams are 8-0 and 6-1, respectively, they’re in the catbird seats for the playoff byes in the NFC, and they’re each in the top 5 of the Shipley efficiency rankings. When you look at the remaining schedules though it sure seems like the Rams could afford to lose on Sunday and still be in good shape to end up with the top seed come January. So really, this supposed BIG game doesn’t really mean anything. It may cause a shake-up in the Shipleys, but that’s about it. 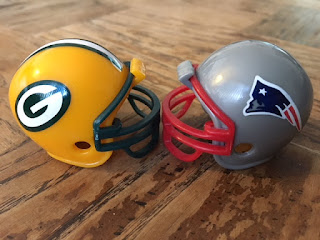 It's a marquee match-up in Massachusetts. Ugh, alliteration is very overrated. Let's check in with the man who will be in the booth for it, Cris Collinsworth:
Agreed CriColl, he seems like he's pretty great. 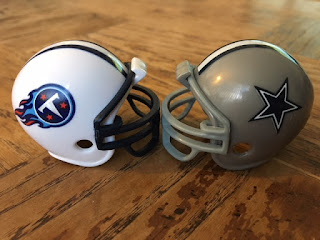 It’s been almost a month since the Cowboys have been in a prime time game. Unacceptable! Sure they had a bye week in there, but I don’t care. Have a TV crew follow the players during their vacations and air it as a two hour special across all the major networks. Actually, now that I think about it, Jason Garrett did pop up during the World Series, sitting in the front row of a game he clearly didn’t care about. Dallas fans may argue that that’s not much different than the scenario most Sundays. The Titans are also coming off a bye, meaning they’ve had a couple weeks to ruminate on their failed 2 point try at the end of their game against the Chargers. In my experience the more you fret over a failed 2 the harder it makes it to successfully push through your next attempt. Having to wait two weeks between 2s must be intensely painful, and Tennessee may want to seek outside assistance. So anyway, that was a poop joke.