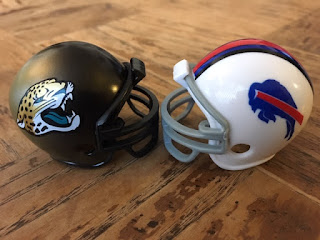 Starting out Sunday hot with a rematch of the worst playoff game in years! And this season they’ve got the records to match. Each squad is 3-7, and coincidentally enough the final score of that playoff game last January was 7-3! Ok, it was actually 10-3, but c’mon, that would’ve been really cool right? Those of us that watched their postseason clash will never forget it. It was an arduous trek that we’ll one day tell our grandchildren about. They’ll be really bored by that, but that doesn’t mean we’ll stop. Of course one of the main reasons we watched back in January was because it was the only game on, that won’t be the case this time around, so you can feel free to avoid this contest. 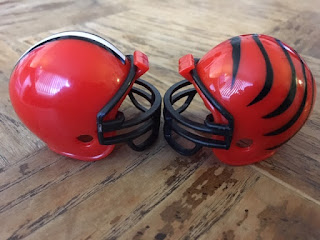 The Browns are coming off a bye after a win, meaning when they take the field Sunday it will be three weeks since their last loss. That's their longest such span (during a season of course) since 2014. If I were Cleveland's interim coach Gregg Williams (and I awake each morning thanking God that I'm not) I wouldn't include that stat in my pregame speech for fear that my guys would get over-confident. But alas, it's likely too late, these Browns have surely read all the press clippings about how occasionally competitive they are. Good luck keeping their heads out of the clouds Gregg, though I suppose you do have experience with heads, so maybe you know what you're doing. 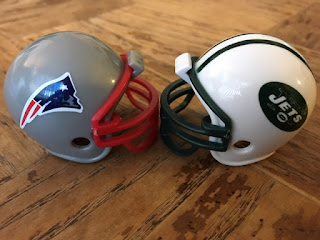 The Jets were on a bye last week, so perhaps you need a refresher as to what happened the last time they took the field; here it is: they lost to the Bills 41-10, at home. Buffalo had only scored 96 points all season coming into that game. In other words the Jets probably should have just gone on a permanent bye after that. Maybe I'm being too hard on them, after all the Bills were starting Matt Barkley on short notice, and when a team doesn't have time to prepare for Matt Barkley what the hell do you expect to happen?!? Luckily for the Jets they've had two weeks to prep for Tom Brady, so they should be totally fine. Or they'll give up 60 and the whole team will simultaneously retire after the final whistle. Keep an eye out for that, it would be a first. 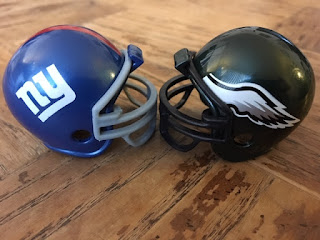 I don’t know if any of us thought the Eagles would beat the Saints last week (and the reason I just think and don’t know is because you guys still refuse to send me your picks; it’s the least you could do at this point), but I’m sure few expected them to be defeated so soundly. Now they’re 4-6, and a loss in this game would leave them with the same record as the Giants and tied for last place in the NFC East. The good news for Philly fans? Last place is only two games out of first place! It’s not a good sign when you have to search for silver linings, but if there’s one team that should have a playbook on how to do so it’s the Eagles. Right? Because Silver Linings Playbook?!? Ya know what I liked about that movie? Yes! The silver linings! The playbook was pretty good too.  Anyway, I think Philly will win and maybe take a deep breath, however it may be their last. 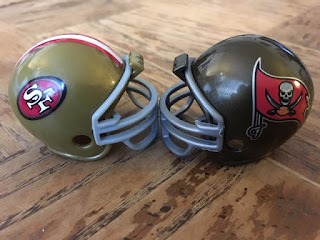 What is going on with this Niners schedule? In succession they’ve played the Cardinals, Raiders, Giants, and now the Bucs. That’s four straight putrid games. Of course it doesn’t help when you yourself are putrid. I suppose that’s the first step out putrosity, de-putrefying yourself. I’m pretty sure that was a Confucius quote. Almost certain. Can you look it up for me? Thanks a bunch! I think San Francisco has a decent shot in this game since Tampa has made the imminently foolish decision to start Jameis Winston at quarterback again. The Bucs aren’t going to make the playoffs. They seemingly want to move on from Winston after the season,  but the only way they’d be on the hook for more money in his contract is if he gets hurt before the end of the year. What could possibly go wrong?!? 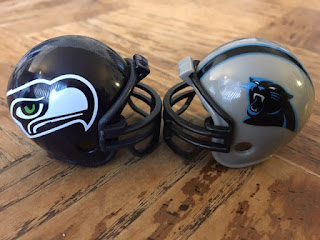 What do you look for in a football game? If you said playoff implications, then step right this way. If you said dynamic quarterbacks who can turn broken plays into transcendent ones then keep right on coming. If you said never-ending pasta bowls ... you're out of luck. That's Olive Garden, there won't be any Olive Garden in this game. You might see a couple commercials for it, but that's the best I can do for ya. But actually, if both of these teams end up as the NFC wild card representatives in the playoffs, a real possibility, I guess you could say they're "all of card men," which sounds close to "Olive Garden." So there ya go, happy now big guy? 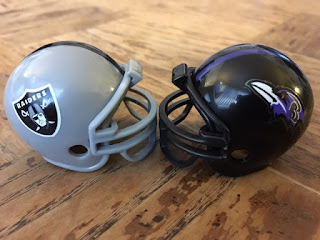 The Raiders won last week! Aaaand completely screwed themselves out of their 1st position in the draft. They now have the same record as the Cardinals and a head to head victory over them. Just when I thought Gruden had some semblance of a plan in place to completely bottom out he goes and does something like this and proves that he’s flying by the seat of his pants. And ya know what? I love it! We need ineptitude like this to truly appreciate greatness. If everybody knew exactly what they were doing every game would be played to a tie (actually I’d be down for that). God bless you Jon Gruden for attempting to make this league lousy again. 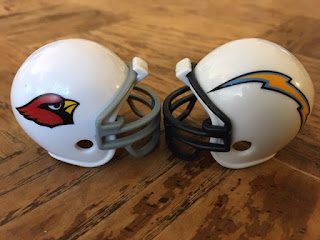 Each of these teams is coming off a rough home loss to the dregs of the AFC West (Raiders and Broncos, respectively). At least the Cardinals has a reason to lose, I don’t know what the hell was going on with the Chargers. Oh wait, these are the Chargers we always knew, they just managed to hold it together for 9 games and avoid ridiculous losses. Has last week’s debacle signaled a return to absurdity? A loss to the Cardinals on Sunday would qualify as a resounding “Yes”. A too-close win would be more of a coy “We’ll see ...! Teehee.” And I think that’s just what we’ll get, because the Chargers are such flirts. 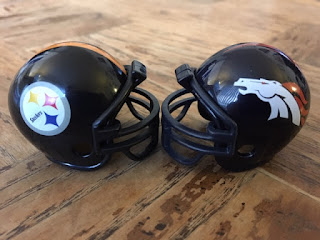 The Steelers started off their season 1-2-1, giving up 29 points per game. They've since gone 6-0 while surrendering 18 points per game. It sounds simple, give up fewer points win more games. And ya know what? It is simple, more teams should try it. But nah, everybody wants the action, they want the points, "Here, score a touchdown so that I can have the ball back and score one of my own." That's verbatim what I've heard multiple players say during games this season. I also heard one guy say, "I've been a good boy Santa, can I have a touchdown please?" But I think it was one of the Chiefs players talking to Andy Reid, so I'm actually fine with that. What's more fascinating about this Steelers streak is that in those six wins they've given up between 16 and 21 points in each game. I have to appreciate a team that operates with such predictability, it's a true blessing in my profession. Yes, I know it's not a profession if I'm not getting paid, which is why I'll say again, give me your money!
VenMo: @Erik-Andersen-19 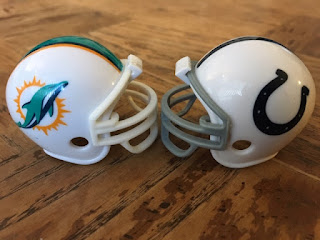 Both of these teams come into this game at 5-5 and in a five way tie for the final wild card spot in the AFC. However, I saw a playoff breakdown on ESPN that didn’t even list the Dolphins as “in the hunt.” It may seem like an innocent mistake, but I think it’s indicative of Miami’s perception in the national zeitgeist. No one thinks about the Dolphins; they play in complete anonymity in a far corner of the country, completely ignored by the rest of the football universe. They are destined to go 8-8, the most forgettable of all records. Their quest towards perfect mediocrity continues this week with a loss to a Colts team making a legitimate charge at a playoff spot, unlike middling Miami. 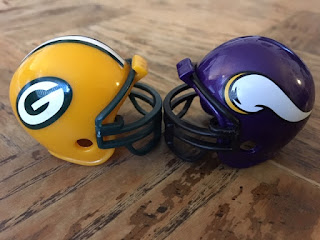 Let's check in with Sunday Night Football analyst Cris Collinsworth to get his two cents on this pivotal match-up:
Kind of feels like you didn't even make a pick there CC. I guess I'll have to handle it. It's Week 12 and the Packers still have not won on the road. Why start now? (Other than the fact that their playoff chances hang in the balance) 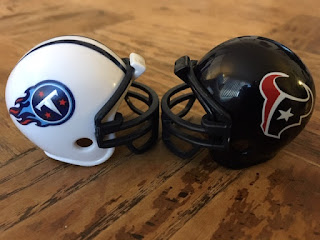 We’re at the end of the week and guess what, there is no match-up of winning teams. This is one of only three where they’re both at least .500. Kind of a bummer. Or is it just the kind of story we love? Scrappy upstarts taking a shot at the big boys! Go get 'em Titans, I believe in you! Even if you are an insurmountable 2 games back of the Texans and a staggering 6 point underdog on Monday. Don’t give up on yourself or your dreams Tennessee, if you don’t believe in yourself who will? That being said I’m taking Houston.