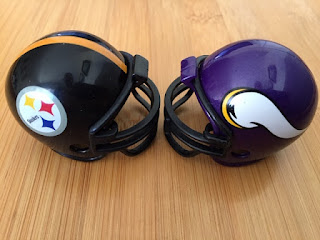 Some would say playing only four days after losing to a winless team is the best thing that could happen to the Vikings. But those people are failing to take into account the multiple Minnesota players that have quit football since their loss to the Lions on Sunday. Some reports have it as high as half the roster. Hopefully the Vikings can field at least 22 willing participants and this game won’t have to be forfeited. Though, their chances of winning aren’t too high anyway considering they’re taking on the red-hot Steelers, winners of one in a row. Judging by the seasons these teams have had so far, there will be a stupid/inept play by a quarterback to squander someone’s chances. So I guess it’s the rare case of whoever has the ball last loses.