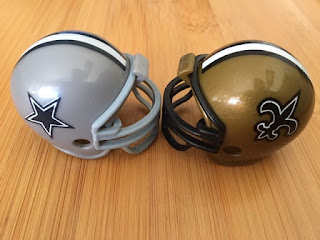 The Cowboys committed 14 penalties in their Thanksgiving loss to the Raiders. Perhaps the short week of preparation is to blame for that lack of discipline. This Thursday they’ll be full rested, so that infraction total should be reduced. Or perhaps they’ll have even more energy with which to commit penalties. Maybe these guys come out playing with their hair on fire. However, that will also be a penalty, because you’re not allowed to have an open flame on the field. Meanwhile, Saints fans will be treated to their second straight Thursday home game. Last week they watched their team lose by 25 points, so it probably couldn’t get any worse this time around. Though there’s always the chance that they’ll get blown out by 30 by a bunch of flaming headed penalty freaks.