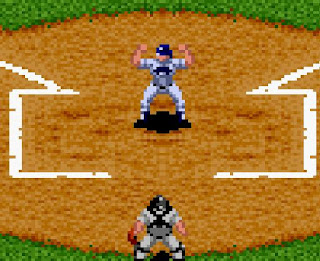 NEW YORK – Hulking Mariners slugger J. Hutt blasted a mammoth home run out of Yankee Stadium Monday. Reports have the ball traveling as far as 575 feet. However, it is unclear whether this record shot will be recognized due to the contest’s auspicious ending. The game was unceremoniously and abruptly called off in the Bottom of the 9th inning just as a would-be 2 run walk-off home run off the bat of Yankees 1B I. Horse was sailing over the fences.
The Yankees were trailing 9-8 at the time in what had been a wild game to say the least. The Mariners picked up their first 8 runs in the 2nd inning with a string of bases-loaded squeeze plays. The Yankees defense seemed powerless to stop the small ball techniques. "I kept thinking I could make the out at home," lamented Yankees starting pitcher W. Ford, "But every time they slid in just under the tag, and by then it was too late to get the guy at first. But M. (Thurmon) kept trying anyway."
The Yankees chipped away until the 7th inning when Hutt extended the lead with his "Noheartian" blast. "Man that thing got out of here in a hurry." Remarked Mariners 2B H. Lincoln. "It just kept on going until it was finally out of the stadium. And right when it went out it kind of bounced off the air or something. I know it sounds weird, but I guess the wind caught it."
To compound all of the peculiarities, technical difficulties in the stadium’s P.A. system caused a simple, repetitive musical tune to be played throughout the game. "It was kind of a jazzy tune, but with a little bit of a zing to it," said Ken Griffey Jr., "Sort of like, ‘Bum ba da bum bum bum bum ba da ba da bum bum. Bum ba da bum bum ting ting.’" Rumors before the game suggested that Griffey may not be in the line-up, however, these plans were called off when Seattle’s faceless manager realized he could do no such thing. "Yeah I thought about sitting Griffey," said Seattle Manager, "But then this little voice in my head kept saying, ‘Eggghhh! Eggghhh!’ so I thought better of it."
Apparently the music didn’t bother the fans, who stood and waived their arms maniacally throughout the game. At the end of the day, however, thousands were sent home befuddled and unsatisfied. "This is bull shit," said Yankees right fielder Y. Clipper, "Every time we think we’ve got these guys beat the game gets cancelled for some reason. It’s like they get a do-over, a reset if you will."

Also, did anyone test the arm of the M's right fielder.