Is That You Tolbert?

I'm not sure about the rest of you, but I had a bad feeling about last night's game when this guy stepped to the plate in the 10th.

Ya know if he was gonna pull that shit at least he could have been on the Yankees.

Also, great job blowing the game Balentien. Awesome stuff out there pal. Not only did he commit the error on the Tolbert hit, but he badly misplayed the "double" that Joe Mauer hit earlier in the inning. If a fielder's error directly leads to his team losing I think he should be credited with the loss, not the pitcher. Balentien is 0-1. 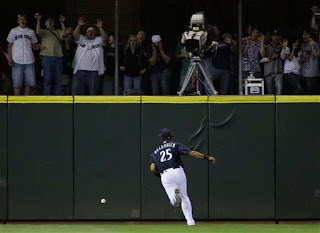 If you post something about Tolbert one more time, you're grounded for a month.