The worst thing I saw while watching baseball this week actually happened earlier today, and it was:

The Mets' rookie outfielder put on a sparkling display of ineptitude during the Top of the 2nd inning in the Mets' loss to the Pirates. To his credit, Murphy actually hit an RBI single to get aboard, which showed a semblance of baseball acumen. This is the point were Jerry Manuel should have sent in a pinch-runner so as to save young Murphy from embarrassing himself. Instead, Murphy remained in the game and the following occurred:

After a pitch or two, Pittsburgh attempted a pick off move to first. replays clearly showed that Murphy was tagged out, however, the 1st base ump called him safe, allowing him to try to go from 1st to 3rd on a base a hit to left a few pitches later. As the throw came in from the outfield Murphy slid in to 3rd. Replays clearly showed that Murphy had once again been thrown out, however, the 3rd base ump decided it would be funny if Murphy stayed on base (I guess) so he called him safe. With men on 1st and 3rd and one out, the next batter hit a grounder to the left side, and Murphy (sigh) decided to head home. This time, the umps couldn't save him seeing as how he was gunned down by a good 10 feet. At this point, Keith Hernandez, the Mets' color man, couldn't help it, and he started laughing hysterically for a good 20 seconds. While still laughing, he managed to say, "I'm sorry, but that's funny. They got him out three times." (That's a paraphrase, but it's the best I could remember) 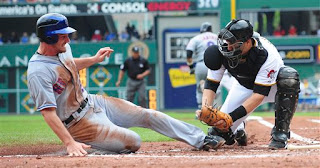 So, just to recap, Murphy could have accounted for all three outs by himself. Most people would say he was running around like a "chicken with his head cut off." I would say that he ran around like a chicken who had a head, a head that was filled with the brain of a dumbshit. It reminded me of a little leaguer who just keeps running around the bases because the defense keeps making errors and they can't get him out. Except, in this case, they did get him out ... 3 times. Maybe he thought it was like double jeopardy, and that he couldn't be called out after he'd already been cleared of the charges the first time.


This week actually had a couple of contenders to the Other crown. Here's what barely missed the cut:

1st Runner-Up:
On Saturday, the 30th the Chicago White Sox and Kansas City Royals wore throwback uniforms from the Negro Leagues to honor the men who had played in the league. This game involved only 2 African-American players, one of whom, was only used as a pinch-runner. That struck me as more than a little ironic.

Actually Erik the funniest part about that story is that there's no Mets player named David Murphy so eat shit. And please take Sean Green and JJ back because they're awful.

Sorry Keith. No trade backs. You like Powder still don't you?


His name is Daniel, I will now recitfy the situation.

Is it just me, or does it seem like Erik is now the sole contributor to this Blog? Thank you for keeping some amount of fresh content on here for loyal mustacheers. Seriously, what the hell is happening around here? This place is a ghost town!

Sorry pervitron 3000. I've been a little gun shy on posting since I've been receiving hate mail.

Thanks Erik, seems to be a common mistake among people to get his name wrong. People also do the same for Justin (they call him Jason) tuck of the Giants. Finn, if Reed is Powder then yes, I still like the way he plays. I feel like he was a little too young to give up on him and include him as a throw in. (I was gonna make a giving up a giving up on Durant too soon joke but decided against it--wait did I just do it?) When are the Andersens gonna make a trip to see the new ballparks?

Is it just me, or does it seem like Erik is now the sole contributor to this Blog? Thank you for keeping some amount of fresh content on here for loyal mustacheers. Seriously, what the hell is happening around here? This place is a ghost town!