Re: A Venture into Hostile Territory or The Worst Beer of My Life 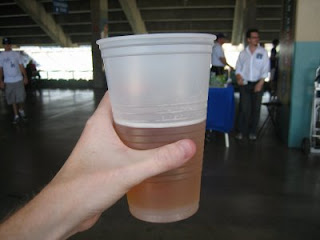 Everyone has times in their life when they regret drinking. Usually it's because of an ill-advised make-out session, a soiled bed, or the fact that you woke up the following morning with someone else's blood on your hands and the sneaking suspicion that you may have killed again. It's not often that you regret drinking because it made you miss a first ballot hall-of-famer hit his 620th home run; however, this was the case for yours truly last night.

The explanation for this begins a couple hours before game time in the Dodger Stadium parking lot. Pete Williams (brother of faceless Mustacheer "Andrew Williams"), an unnamed third party, and myself had some pregame BL smooths (that's a Bud Light for all the lame-o's in the crowd). We were confined to the car by patrolling security guards and policemen. We might have gone to a nearby bar if they existed. In case you don't know, Dodger Stadium sits alone on a hill and is surrounded by a giant, circular parking lot which is, in essence, a mandatory $15 tip for the team (Thanks for the baseball guys!) You really don't have a choice, you have to park there, which makes getting out of games so much of a free-for-all that it's hosted by Todd Pettengill. Anyway, I can't speak for the other guys, but I was good and buzzed by the time I got into the game. We bought our tickets at the box office, Pete didn't have any cash, so he used his card, and I gave him cash for my ticket (this seemed like the logical move at the time). When we got to the game the aforementioned buzz wore off, and because I'm a binge drinker I was really fiending for something to drink by the time the 3rd inning rolled around. Now, if it were a couple of months from now, maybe my lingering college tolerance would have continued its decline to the point that I could have waited until after the Top of the 3rd, but alas, that was not the case.

As I got up from my seat I thought, "Well, we have the top of the order coming up, maybe I should stay." But, I knew there was a beer stand right outside our section so, I would be able to get back to my seat within a matter of about 2 minutes, I'd be fine. I got to the beer stand and, being in the agreeable state I was in, I was able to talk myself into a $13 Heineken. I figured I'd just pay for it with my debit card and forget about it, however, I was informed that this particular stand was cash only. I checked my wallet for cash but, of course, all of mine was sitting in that slimeball Pete Williams' pocket. I was forced to go to a normal concession stand that had a giant line. At this point I was dead set on getting some sort of alcoholic beverage, so I decided to brave the throng of fat Angelinos. I should have thought about this more, thought, "Maybe I should wait until the M's are pitching, Griffey's coming up soon." But I didn't, and now I'm haunted by it.

I had been keeping an eye on the game on the concession stand's monitor, it looked like someone had gotten on base, but I wasn't sure who. I got up to the 2nd or 3rd spot in the line when I heard it: a CRACK followed by 40,000 people groaning. I looked up to the monitor to see the ball landing well into the right field seats. One thought ran through my head "Don't be Griffey, please don't be Griffey." The broadcast cut to the Mariner rounding 1st, it was Griffey. I yelled, "Damnit!" immedi 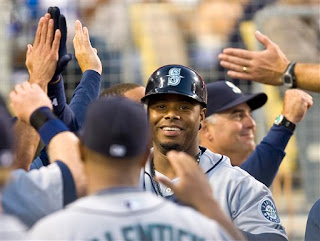 ately after I saw this, which was probably confusing to the rest of the people in line considering the fact that I was wearing a Mariners shirt (2004 workout tee).

The first thing I thought about when we signed Griffey was how cool it would be to see him in the uniform again, I envisioned him hitting a home run for the M's again and I got chills. Well, when we went to the game last night we were just hoping that Griffey would get the start. We just wanted to see him in the uniform. Seeing him hit a home run would have been too much to ask for, and for me, it turned out it was. Did I get chills seeing him trot around the bases on a 20 inch monitor hanging from the concession stand ceiling? No. I did, however, get a sick feeling in the pit of my stomach; the kind I imagine someone gets when they realize they picked the winning lottery numbers but lost the ticket.

There are times in which I feel (and maybe some of you do as well) that I'm a glutton for punishment when it comes to sports. Whenever a team I root for falls short there is the upside that we still have something to shoot for, and that all the losses will make it that much better when we finally do come out on top. In this situation, however, there was no silver lining. If anything, you might say it was tragically comical because it was my fault. I could have just stayed put for another half inning and experienced firsthand what those imaginary chills were really like. Instead, I was charged $11.50 for a 24 oz. beer and a feeling of deep regret.

When I got back to my seat Pete said, "Well, that better be the best beer you've ever had." It was Budweiser American Ale so, needless to say, it wasn't. I really appreciated the smart-ass comment, especially coming from a guy whose lack of cash had caused this whole mess in the first place. When I woke up the next morning there was blood on my hands ... I had killed Pete Williams.
Posted by Erik at 6:24 PM

Your first mistake was drinking BL Smooths instead of a few Boggs.

Hey you can console yourself by looking forward to watching the Sonics kick some Clipper and Laker Ass after our sweet draft this year. Bring it on MFs