Most people think this movie is a chick flick... but they're wrong! Or maybe they're right... but it's actually pretty funny. 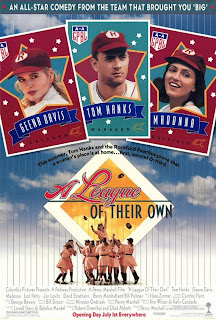 Tom Hanks is real funny in this flick. Rosie O'Donell AND Madonna at their hottest!

It's also great when Hanks calls the ump a penis with a little hat on. Or when Hanks nails the kid in the face with the mit. Watch that scene again, he really smacks him.

Anyway, nobody reads these anyway, so they'll be getting shorter and sweeter. Too bad since we're so close to the top ten. Boo hoo, waaaaaa.