Fitting that this film is #13, cuz the Ram had a string of bad luck towards the end of the road...

Ok, that was corny, but shockingly to most (not me) a movie about a professional wrestler wasnt: 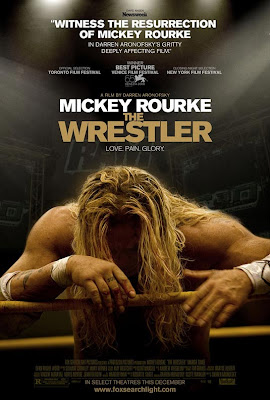 I really loved this movie, and not just cuz it's about wrasslin'. If you haven't seen it, DO IT ASSHOLE!

Did it deserve Best Picture... probably not, and it didn't win, so there. But I thought all three leading roles deserved Oscars. Rourke, Tomei, and Rachel Wood. All fantastic performances. No joke here.

I had two small problems with this movie...

1) They changed Randy's theme music at the end to Sweet Child of Mine. He came out all movie to Bang your Head by Quiet Riot. No way a wrestler ever would do this. (back story is Axl Rose gave them a shitload of money to finish the film, and they did it as a thank you... Rourke even thanked him when he won the Golden Globe). And if you HAVE to use a Guns song (which otherwise, I'd have no problem with) was Sweet Child, really the right call? How about Paradise City or Welcome to the Jungle? Maybe Mr. Brownstone if you wanna get a little more poetic.

.
.
.
.
.
I think Randy should have died a wrestler's death at the end. Someone should have found him in his hotel room, alone, dead from heart failure. It would have been a nice little tribute to so many of the fallen wrestlers of the past. Sounds corny again, but I'm being serious.

Anyway, whattya think of The Wrestler?

whoa, whoa, not all at once

This one became an instant classic for my roommates and me immediately after we saw it. Anytime there was some psuedo-frustration with one another we'd shout "Get your own fuckin' potato salad!"

I think I put this top 10 because anytime I think about it or say a line when I'm drunk I instantly think, "Oh man I want to watch that right now." Unfortunately I still don't own a copy, maybe I should get on that. For now I guess I'll just have to settle for partying like a fireman.