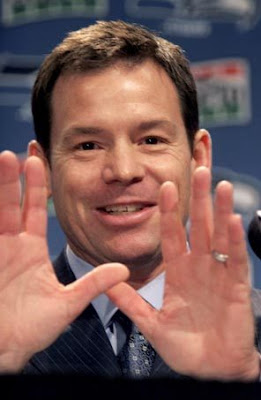 I can't find a link to Mora's press conference, but let me TRY and paraphrase. He basically said the next few weeks will be about how the Seahawks deal with adversity. They'll either start finger pointing and complaining or band together and be great men.

A quick follow up question, from I believe Art Thiel "Where is this coming from?" (and again, I'm paraphrasing). Mora replied that it wasn't coming from anywhere and he'd seen no indications that the Hawks were heading down that dark path.

"Isn't that the norm then? Shouldn't we expect these players to be decent human beings who will try their best? otherwise, why even bring this to the media's attention coach Mora?"

I don't hold press conferences telling people I have no plans to shit my pants today. Why? Because no one expects me to. (or they shouldn't, anyway). Mora sounded like he was going on the offensive and maybe trying to diffuse a situation before it even got started.

I have two comments: 1) I REALLY do not like where this season is headed (see previous post about jerkface WRs) 2) I don't trust Jim Mora.

I think we're in a lot of trouble.

Well when the Lions are next on the schedule teams tend to deal with the adversity real well.

Well when the Lions are next on the schedule teams tend to deal with the adversity real well.