Oakland is up 1-0 and they have the bases loaded in the Top of the 6th with no outs. Former Mariner Eddie Guardado is summoned from the bullpen to clean this mess up. He proceeds to walk in a run on 4 straight pitches, which gets him pulled by manager Ron Washington. As he's leaving the mound he starts an animated argument with the ump, who promptly tosses him. Guardado then maniacally waves his cap over his head in some sort of pseudo-curtain-call. 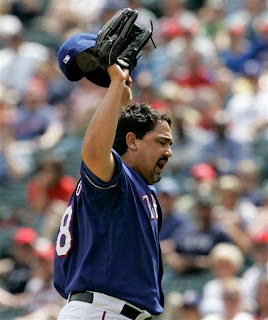 After they went to the commercial break, I thought about what had just happened and started cracking up. Guardado walked in a run on 4 pitches and then got tossed after he'd already been taken out of the game. That has to be one of the worst pitching appearances of all time. When you throw in the hat-waving I'm not sure there's an argument.


So now, in honor of Guardado I will be be making a weekly (or bi-weekly, or semi-weekly, or whenever something terrible happens) post about the worst/best thing I saw in the many hours I spent watching baseball.

I've kicked around a few potential titles for these posts. They are:

-The Guardado Award
-Rough on the Diamond
-Awful
-Yikes
-The Steve Bal-Boner Play of the Week
-Man ... You Are One Pathetic Loser

Let me know what you think of these titles, or if you have any suggestions of your own.
Posted by Erik at 3:18 PM

Email ThisBlogThis!Share to TwitterShare to FacebookShare to Pinterest
Labels: Every-Day Eddie, Other

Bateman of the Week

I figured everybody loves a poll, so I decided to let everybody vote on this matter. It's on the side of the page so go ahead and make your voice heard! ... Please? ... I need this.

The Memorial "Finn and Trav in the Morning" Excellence in Broadcasting Award.

how about Erik's Lil Heroes

This is a really good read for me. Must agree that you are one of the coolest blogger I ever saw.medical marijuana card az