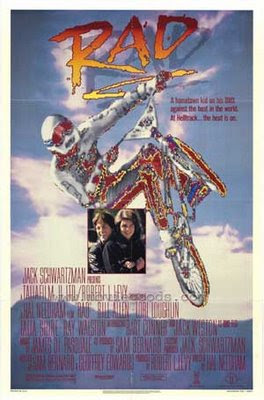 Wanamaker: Rad is the story of everyone's favorite fad sport of the 80s- BMX. The basic premise was that the main character had a big BMX race and his SATs scheduled on the same day. He chose to race for a sponsorship and skip college (how I miss Reagan's America). What I remember most about Rad is Mrs. Mossimo herself (Lori Laughlin), Talia Shire and those great camera freezes on the bike jumps. In case anyone is curious, there is an online petition to get Rad released on DVD - http://scrapetv.com/Rad/Rad%20page%201.html

Peter: I didn't have this on my list, but I remember Scott (Mr. F's note: that's the legendary Scotty K) talking about it when we were younger and he thought it was pretty bad ass. It's the best movie about BMX biking of all time. Which reminds me of how Sinclair had the Huffy White Heat and the old commercial jingle for that bike was "Huffy's got what's hot now. Huffy's got white heat." Which reminds me of how any time that Sean and Adam were walking home from our house and Sean wanted to get home quickly he would tell Adam that there were guys that the guys would kick their ass if they caught up to them. Also, my girlfriend saw it in highschool.

Mr. F:Ah! Memories generated by films you've never seen. This list is off to a hot start... white hot.

Sean: Never heard of it. I bet its a rad movie, Im sure Im missing out.

So the movie poster says it's produced by Jack Schwartzman and it stars Talia Shire. This means there was probably a young Jason Schwartzman hanging around set. Believing this as I do, I no longer have a problem with its place on the list.

so you are going to list all 50 movies one by one? Is this a seattle sports blog or a sports movie blog? And Rad has officially gotten more coverage than the Sounders on this blog.

I'm starting to come around on this movie.

i have this movie on DVD

Damn it, for some reason everytime the girl is performinng a difficult stunt on the bike, her face is totally obscured in some creative way. that's super weird.