Much has been said about this year's Mariners club and chemistry. You bring in some solid clubhouse guys and all of the sudden you start winning. Is it that simple? We have heard that the likes of Griffey and Sweeney keep everyone loose. A few nights ago Grif and Johjima were standing in the dugout comparing all their gray hairs for about 5 minutes of the game. Im not sure why FSN felt the need to show the entire 5 minute conversation instead of the game, but that is an entirely different issue. Sims and Blowers were getting a real kick out of imagining what they were saying to each other. In the background you saw Sweeney and and Balentien come running out of the tunnel back into the dugout with huge grins on their faces. It would've gone unnoticed if not for the weeks and weeks of watching this team become increasingly friendly with one another. When Mr. F and I went to The Safe a month ago and sat behind the Ms dugout, guys were rubbing each other's backs while watching the game. (Except for Washburn who had his back turned to the game trolling the stands for his next cup of juice.) Then the Griffey/Ichiro tickling stuff came out (See Here). Then a source of mine in the NYC alerted me to an image captured after Sweeney and Russell "The Muscle" were seen headed into the visitors clubhouse at the new Yankee Stadium. This answers a few questions:
1) Why does Mike Sweeney keep having back spasms when he hardly ever plays?
2) What on earth has gotten into Russell Branyan?
3) Just how close is this Mariners Team? 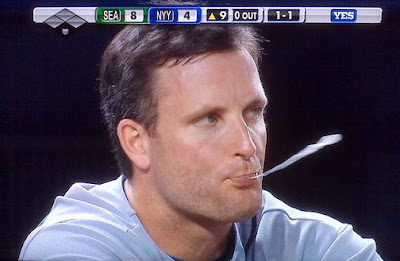 The very next night Branyan became the 1st player to hit the Mohegan Sun Bar 500 ft away from home plate.
Posted by Fortune at 10:36 AM

Welcome to the party pal!

Paragraphs, meet Fortune. Fortune, this is my friend Paragraphs.

It was by design so you would just keep reading until you got to the climax.

Too bad my indentations didn't hold up.

This certainly puts the Sweeney-Piazza relationship into context.

Poor Piazza ... never did get that trade.

This certainly puts the Sweeney-Piazza relationship into context.