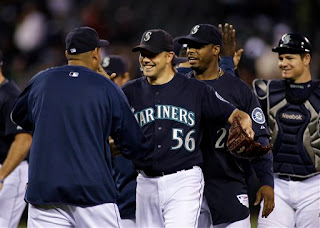 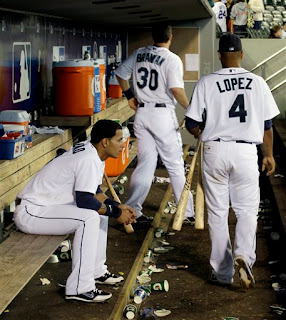 I think it’s safe to say at this point that no one expected the Mariners to do this well through the first half of the season. (Of Course, I’m excluding the proprietors of this site, all of whom expected the M’s to be doing much better judging by the preseason predictions.) And while that first statement may be true, it’s more or less a Steve Scheffler-sized backhanded compliment, considering that the team is only 43-41. Many people would say they’re very happy with the decent start and I don’t blame them. It’s fun to watch a competitive team, especially after they historically underachieved last year. While I too have been pleasantly surprised by the non-ineptness (eptness?) of this squad I have come to a realization over the past couple of weeks … we couldn’t be in a worse position.
As we approach the trade deadline the M’s are caught in no man’s land, tantalizingly close to the division lead (4.5 games back by the end of the night) yet obviously flawed at the same time. It’s this point in the season when teams usually decide to become buyers or sellers, and it’s time for me to figure out which one the Mariners should be. Why me? Because who else is gonna do it? You? Huh? You gonna do it? Didn’t think so asshole. Anyway, here we go:

The Case for Buying:
We’re so close! Right now we’re 4.5 games back. As we all know the M’s have come back to win the division from much bigger deficits before. Our pitching has been very good, borderline dominant; and coming down the stretch and in the playoffs good pitching rises above good hitting. If the M’s went in to the first round of the playoffs with their 3-man rotation lined up correctly they could throw Felix-Bedard-Washburn at the opposition. The way these three have been pitching, it gives them a great chance to get by round one at least. While the hitting hasn’t been great, it has proven timely, and if the pitching staff keeps it up, that’s all they need. Of course, if the M’s are buying, hitting would be the first thing they would try to address. An added bat in the middle of the line-up could go far. How far? How about all the way to Cooperstown! (That’s right by that last statement I’m implying the whole team will be enshrined in the Hall of Fame. Sure it’s unprecedented, but so was SoDo MoJo, and we all know how that turned out ….. oops, let’s just move on.)

The Case for Selling:
We’re as good as we can get. The pitching staff has been pretty unreal this year. They have the best ERA in the AL by a decent margin (.2 runs) and the team’s record is only 43-41. Why? Because they can’t hit. They’re 12th in the AL in OBP, Slugging Pct., and OPS, and 13th in runs scored. But when you look at the line-up would you really say that anyone is underachieving? Except for Beltre, who was starting to come around as he always does in the 2nd half of the year before he opted to have surgery. Honestly, if anything the line-up is filled with overachievers: Branyan, Gutierrez, Chavez (before he got hurt), Johjima (I didn’t expect him to get a hit this year, so he’s done well by those expectations). What it boils down to is that this line-up just flat out sucks. Franklin Gutierrez is batting 5th … that’s not good. (I know he’s hit very well lately, but still) (By the way, I’m trying to set a record for parenthetical comments.) So, obviously, if we were trying to buy we’d look for hitting, but who would we realistically get? The only place I could see a possible opening in a position that would realistically bring us the type of bat that we need would be LF. The last thing I would want to do is deal more top-level prospects to get a decent player this season who probably wouldn’t help us get to the playoffs. (Wouldn’t we all rather have Adam Jones and George Sherrill at this point?) If we decided to pull the trigger we could deal Bedard, Washburn or even Russell "Fake Buhner" Branyan. While these guys might not fetch huge loot they would probably bring back decent prospects. And if the team is building for the future, getting rid of Washburn or Branyan wouldn’t be a detriment.
So there are both sides, and I gotta say, I’m kind of liking my second argument better. We all knew going into the season that the M’s probably wouldn’t contend this year. And surprise! They sort of are … kind of. But at the same time, they’re hanging on by a thread. The upcoming 4 game series with the Rangers could go a long way in determining where we stand. At this point I love all the moves that Z-Man has made, so I trust his judgment in the next few weeks. That being said, I think we were all fine with a dismal season as long as it looked as if it might be leading to better ones in the future. Unfortunately, what we might end up with is a surprisingly enjoyable season followed by frustratingly mediocre ones.
Posted by Erik at 8:32 PM

I think we are all holding on to false hope. We have had such a bad stint in Seattle sports that we want to think this team is better than it is. I think we need to sell as hard as that is to make sure that we have a team we expect to win not just one were surprised to see win.