With only about 6 weeks left until the college football season commences most fans are eagerly anticipating their team’s opening kick. It’s a special time of year for most, however, it has ceased to be such for fans of the Washington Huskies. This storied program has experienced an extremely well publicized fall from grace over the past 5 years. Many believe the scandal and tumult left in Rick Neuheisel’s wake to be the culprit for this plummet into putridity, however, I have discovered the truth. In actuality, their demise is the result of a curse. But what or who brought this curse upon UW? Whose repeated rejection was the catalyst for this cataclysmic collapse into the cavernous college football depths? The answer … it was these assholes: 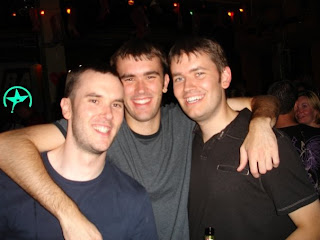 That’s right, these three jerks known simply as the "The Andersen Boys" are the reason that the UW football program has become a giant punchline. Each of these bastards (not literally) were accepted to the prestigious University as a result of their academic exploits. As children of two UW alums, one would assume that one, if not all, of these bums would proudly follow their parents’ footsteps … but they didn’t … not one. No, all three of these rogues spurned their hometown school for more glamorous locales like New York, LA, and Pullman. And what did they leave in their wake? Havoc.

When the first "Andersen Boy" was born in 1980, it was obvious that the UW football program took note and began to play better in anticipation of having him and his brothers in the Husky Stadium stands cheering them on. This ascension of the program peaked in 1991 when the team went 12-0 and earned a share of the national championship. This magical season can only be explained by the fact that the Huskies were encouraged at the previous years Rose Bowl when they looked into the stands and saw the three "Andersen Boys" decked out in Purple and Gold.
Sadly, this would not become a common occurrence. By 2004, each of one of the three sons-a-bitches (also not literally) had declined enrollment at UW, and the football team felt the wrath. Just look at the numbers.
1980-'98
Overall Record: 153-37-3
Bowl Games: 15
Andersen Brother Enrollment Potential (ABEP): 3
'98-'99
Overall Record: 13-11
Bowl Games: 2
ABEP: 2
2000-'03
Overall Record: 32-17
Bowl Games: 3
ABEP: 1
'04-08
Overall Record: 12-47
Bowl Games: 0
ABEP: 0
They speak for themselves. Ever since it became clear that there was no chance that an "Andersen Boy" would attend UW, the team has had no hope. From '80-'03 they had a .692 winning pct. and an average record of 8-4. Since then, the numbers have dropped to .203 and 2-9.
So there you have it, the definitive answer for why the University of Washington football team has fallen so far in the last 5 years. Who's to blame? Neuheisel? Hedges? Willingham? .... Nah, it was the Andersen Boys.

Email ThisBlogThis!Share to TwitterShare to FacebookShare to Pinterest
Labels: Andersen Boys, Curse of the Andersen Boys

Not half as proud as you look in that exceptionally well framed and composed glamour shot.

Oh yeah, is that a Dr. Skipper you're holding in your hand?

God-Speed "Andersen Boys"....I salute you all.