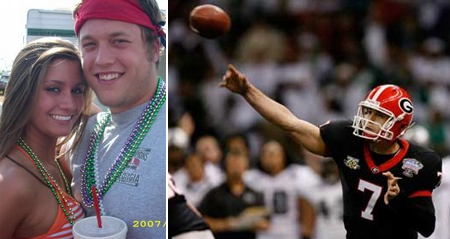 With Matthew Stafford being touted as the possible first pick in this year’s draft, I feel it necessary to provide an in-depth profile of the man. Scouts have been raving about his combination of elite arm strength, great accuracy, and solid leadership skills. Personally, I’m not sold on the guy. He never really seemed to put it all together while at Georgia and play consistently well. This forced me to do a little research since I disagree with the experts on this one.
I was able to discover some interesting things that happened during Stafford’s childhood. He had a live-in male nanny (seen below with Stafford at age 8) w

ho was a father figure to him. He would often go to him for advice and would confide in him. When he was a young boy, Stafford’s nanny persuaded him to take up ballet in favor of football. Stafford’s father was angry and tried to force him into football. There was even a point where a girl joined the team and outplayed Stafford. As we now know, Stafford has taken up football, but it’s possible that every time he goes out there he resents his father for not letting him become a dancer. Later in his childhood there was another incident of note (another episode if you will) in which Stafford felt extremely guilty for the death of his accordion teacher. He secretly wished her death and the wish came true. So it’s possible that he is still holding on to this guilt.

There was also a report that when he was younger, Stafford overheard his mother mention that he was an unplanned pregnancy and that having him set her career back by ten years. He ran away from home and spent several days working at the local bus depot before finally returning home.

He once produced counterfeit money out of his home.

And, the most disturbing of all episodes in his youth, Stafford was touched inappropriately by a camp counselor. I was able to find video of Stafford blowing the whistle on this guy. To protect his identity they refer to him as “Wesley” and put on logos to promote an 80’s sitcom (not sure why though). See for yourself:


So the way I see it, Stafford has all of the measurables, but he brings a lot of baggage with him. I wouldn’t want a quarterback with all of this guilt, resentment, and mental scarring that Stafford has, but maybe the Lions do.
Posted by Pete at 5:36 PM

Now that is what we are paying you for!! I wonder if Matt ever thinks about how his life would have been different if he wouldve struck out his dad instead of giving up a grandslam with Willy Mays, Hank Aaron, Mickey Mantle, Harmon Killebrew, Reggie Jackson, Johnny Bench, Ernie Banks, and Bobby Goulet watching. I bet he would've gone pro in baseball but all those guys have serious connections.

How did his brother Todd Bridges turn out?