Alright, let's do it to it, let's get this party started. And now for the Rumble that drew #10!

The first real Rumble gets on my list at number 10. There was nothing overwhelmingly great about this Rumble, but by getting #10 I'm basically just saying it was better than half of them. What sells me on this one is the overall storyline: Ted DiBiase had bought #30 and the help of the and was poised to steal the Rumble. Of course, he didn't and Big John Studd won, which was kind of lame, which is why it's no higher than 10. Also, the Ax and Smash drawing #1 & 2 was pretty memorable, with probably the best part being their pre-match selections:

Smash (Looks at the number he's just drawn): It's gonna be a long night.
Ax (Looks at his): You said it.

Or something along those lines. Their double-team on Andre was good, along with Andre eliminating himself due to his fear of Damien. Another lasting moment was Hogan's "accidental" elimination of Macho Man, stoking the flames of a feud that would culminate in the most homo-erotic World title match ever at WrestleMania V. Also, Hogan was eliminated with help from the outside establishing a standard for the only way he could possibly not win a Royal Rumble.

Alright, the lists are underway. Whaddaya got big bro?

Strong #10, if not just a liiiiiittle predictable. I don’t have much to add on that one, except this: Smash actually says: “Me too”. Bit of an easter egg to the kids paying attention at home. Smash was # 2 later that night.

(quick side noet: This is the infamous PPV where Owen Hart tells Bret he “Kicked his leg out of his leg”)

There are a LOT of negatives about this rumble, like the first two dudes coming in followed by the mysterious Kwang and a sedated Rick Steiner (seriously, what the fuck was his problem that night). The beginning of this Rumble is painfully boring, even with the Diesel domination. Capped off by an unforgivable barely caught weak elimination of Macho Man Randy Savage. Although Backlund almost screwed everything up by dumping Diesel. That would have been funny.

What saves this Rumble for me is the drama of whether or not Hitman would be able to compete, and when he does he wins (with Lex, who’s paralyzed right now, so I’ll go easy). I especially oved when they cut off Luger’s music and Hitman’s starts. He turns around and yells “alright!!!”. Maybe the last time Bret was truly happy.

That’s what I got. What’s your number 9?

Chris Benoit goes from # 1 to win it all. I wish he'd come in at 4 to cross another number off the 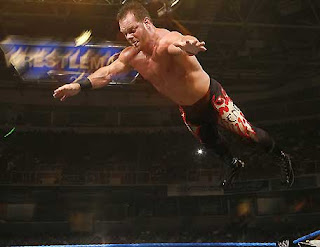 list, but I digress... There's the cool #1 vs #2 that carries the first half of the Rumble until Mick Foley appears as a surprise entrant eliminating Orton. Then the end has some great stuff. It's the Big Show stand... he takes finishing moves from Jericho, RVD, Cena, Angle and Benoit, then rallies back to the finals, (that may be the best group of pure wrestling talent in a final group). Then we get to possible the best final elimination in the history of the Rumble. Not the best Final 4 (but close), not the best finals, but the best actual elimination. Benoit is about to be chokeslammed out of the ring when he reverses into a (gulp) choke hold and drag Show out of the ring. All in all, it was a kil... I can't do it.

Wow, I'm surprised you put '04 that low, considering your strange post-murder appreciation for Benoit. And if we're in the business of correcting quotes, doesn't Hitman shout "Yeeeeeeaaaaaaasssss." as he turns around? I guess you've probably seen it more recently, but considering this was a staple of my childhood, I think I should remember. Also, if you're bringing up Kwang, I should tell you that my sources inform me that he was replacing Ludwig Borga. Anyhow, here's the Rumble that drew #9. 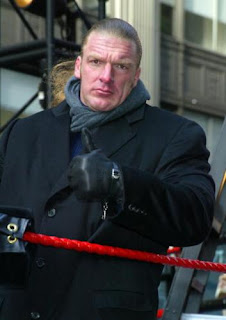 Ok, obviously #1 & 2 suck, they're stupid. And I've never been a hug Booker T fan, so #30 isn't a thrill for me. But there are a few great things about this Rumble. First is the Undertaker's domination. I checked the stats, and he's only in there for about 8 minutes. I've never seen anybody have a more productive 8 minutes without the help of Jamie Brinkus. 'Taker runs through everyone, and then gets eliminated by Maven out of nowhere, which was a genuinely good moment because it actually caught you off guard, which is tough to do at this point. Of course, this was followed by the Deadman taking him to the learning tree for the next hour. (Is it racist to say that an older white man took a rambunctious young black man to a tree?)

The second great aspect is the return of Mr. Perfect. He lasts all the way until the final 3, even going past Austin who gets dumped right before him. And even though you knew that a returning HHH was going to win, you had to be rooting for Perfect. In fact, I think Mr. Perfect actually got a Perfect-plex off on him, which elicited a huge pop from this smart mark.

This Rumble can be no higher because, as I mentioned before, it was obvious that HHH was going to win, and he did that extremely lame HHH-up, arms in the air move before he dumped Angle. Terrible, just terrible.

Looks good. Can't wait to see who tops the list.

wow, quite a lot of work going into this blog lately. Nice work. My question here is, how many of these guys, if still alive, will be signing action figures at the county fair in 10years while trying to find rent money for their mobile home fee that is 4 months past due? Speaking of that, where is your review of "The Wrestler"? Just saw it last night. Marissa Tome is still looking hot I might add.