Sorry to burst your bubble but no he says, "Alright" . Look it shocked me too.

It had four returning superstars: Godfather (eh), Val Venis (eh), Goldust (he actually got a pretty good pop, and since it was his return the #2 spot wasn't as lame as you think), and Mr. Perfect.

It was great to Perfect in the ring again, and after watching it last night, right when he comes out he pumps his fist to the pop and yells "Fuck yeah, man!". Plus he might have been drunk. No kidding.

It's got one of the best final fours ever, and a cool showdown moment for and Triple H (right before Hurricane comes in and tries to double chokeslam them).

But the part the extra stuff that makes this a great Rumble for me was a sequence in about the 2 quarter of the match where the Taker is taking on the Hardy's and Lita comes in (really a shame what happened to her) and they kick the shit out of Taker for a while. The Deadman ultimately eliminates them both, but only to de dropkicked form behind out of the ring by Maven. Maven is lame. But that was a classic Rumbled moment.

This Rumble is where makes his first big leap towards superstardom. There's good moments of Austin waiting in the ring looking at his watch and doing pushups, and later freaking out when it's the Hitman's music (out of character, but who cares). Plus there's the Latin Lover's entrance:

Jim Ross: "It's the Latin Lover"

Vince McMahon: " It certainly is"

Something you'd like to get off your chest Vince? Anyway...
Also the second year in a row the King was uppercutted over the top ropes (they also did the lame Takes a King to know a King line that McMahon ruined)

Then there's the classic final ring after # 30 comes in (and they get rid of Hogman and Flash Funk). Were left with the final 4 AND Rocky Maivia, Diesel (Kane), Mankind and Terry Funk.

Ok, well just to clear things up, I had 2004 at #5 on my list. The idea of someone winning from the #1 spot had already been done before, but a guy like Benoit was the perfect person to do it with if you were gonna do it again. I mean if somebody's gonna go all the way with something, Benoit's your guy (Oh no).

The ending is what really sells me on this Rumble though. Angle has Show locked into the ankle lock and Big Show brilliantly rolls over the ropes to eliminate him. As a side note, why would Angle be using the Ankle lock in the Rumble? Logically it doesn't make sense. You're gonna take away the Big Show's legs? If he can't stand up how the hell are you gonna get him over the rope? Anyhow, Benoit's elimination of Big Show may be the best final elimination in the history of Rumbles. It was actually somewhat believable and it really epitomized Benoit's effort. As terrible as Benoit's legacy has become, I have to give credit where it's due. It was finally his main event push, and they gave it to him in the greatest way possible. And that's why I gave this Rumble a high ranking.

Ok, you've got 1997 at #8, well I have to disagree with you here. I have it all the way up at #3. It would possibly top my list if the roster weren't so terrible and unrecognizable. I mean, there were around 7 or 8 guys that were not WWF wrestlers, what's the point?

My first reason for having it so high is the great push that got with this Rumble. This was right at the time where fans were starting to get on board with him, and he was on the verge of being a main-eventer, which put him in the perfect spot to win the Rumble.

Secondly, there was a unique ending. Of course, cheated, but that's what made it cool.

Thirdly, the sequence where is dominating the Rumble is one of my favorite moments ever. He ends up the only guy in the ring, eliminates a couple guys who come down after that, and is left sitting on the top turnbuckle looking at his watch. (I always love when it's about halfway through and there's only one guy in the ring.) Then Hitman's music hits. looks up shocked. He was totally confident until this moment, and now he knows he's got a real fight on his hands. It was awesome, they paced it perfectly so that this was right in the middle, which set up the rest of the Rumble. Anyway, those are my thoughts.

Here's the Rumble that drew #8 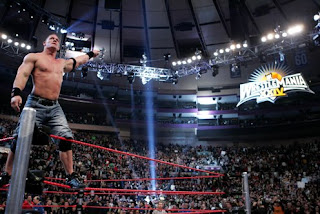 Yeah, I know, somewhat of a shocker, but hey, anything can happen in the WWF. Obviously, 1 and 2 are great, even if they're completely unbelievable. If I remember correctly, the Rumble itself was pretty enjoyable throughout. But the real reason i put it on the list is the ending. We knew there was a "mystery entrant" and by the time it got to #30 we knew he was coming out next. In the back of my mind I was thinking "It can't be Cena can it? He's gone for like 4 more months right? Yeah it can't be him, well who's it gonna be?" Then the countdown ends and : Ba ba da dum Ba ba da dum! "Noooooooooooooooooo!!!!!!!!!! Damn it!"

Look I hate Cena pretty hard, but when he came through the curtain the hate turned into that rare type of "You son of a bitch" hatred where you can't help but crack a smile. I knew he would win the second I saw him, and I didn't really mind at that point. It was such a surprise that I felt like I'd got my moneys worth.

Also, the final 3 was comprised of the most popular wrestlers in the business which made the MSG crowd pretty great.

Great thoughts on the 97 and 04 Rumbles, very similar to my thoughts… you did read my thoughts, right? Anyway, it looks like we agree on why the Rumbles were great just not on their order in the top 10. Oh well.

And… good call on the ’08 Rumble, I agree with everything you have there. I was actually excited to see Cena, which is the first time that’s happened since the Wrestlemania. There were a couple of moments that also stood out: Benjamin’s leap onto the turnbuckle and getting Morrison and Miz (not eliminating, but that would’ve been cool). Unfortunately he got superkicked out of the wring 30 seconds (or less) later. You take what you can get from Benjamin in the WWE. There was also the Snuka/Piper stuff, and the final three showdown was great. All three have a staredown and do their respective taunts, culminating in two DX crotchchops before they go at it.

What Pervitron 3000 wants, Pervitron 3000 gets: The Wrestler was a fantastic movie. Any professional wrestling fan HAS to see it, but I'd also advise any fan of cinema to see it as well. Mickey Rourke definitely deserves his Golden Globe, and I hope he picks up the Oscar as well. It's probably the best leading male performance I've seen this year, but I dunno. Marissa Tomei is great, and still hot as hell, and gets all kinds of naked... but I really thought the daughter was fantastic too. Evan Rachel Wood should be getting some award consideration, but doesn't seem to be getting much love.

The movie seems to capture (from what I know, which isn't a lot) some of the hardships these fading stars that are professional wrestlers go through. It was real good.

There were a couple of things I'd change, but I can't really get into to it without spoiling things for everyone, so I wont. On a Netflix scale i would give it 5 stars. But 4.5 or 4.75 is probably more appropriate.

Definitely see this movie. Right after you're done pirating a copy of Delgo.
Posted by Mr. F at 5:38 PM

it's like this: Delgo may be a better movie "technically", but the wrestler wins "emotionally" if you know what I mean. Which I don't...