We haven't been covering high school football much at HCM, and I'll try and change that.

I've been following the Dillon Panthers on their quest to another state championship.

Riggins gritted it out with some tough yards and some dirty hits. QB 2 Matt Saracen looks to be adjusting well to his new role at WR... but I feel like his time at QB 1 might not be over... have to wait and see.

The refs were against Dillon from the start. Some bullshit politics I suspect. Ultimately Coach Taylor had had enough and was tossed. He handed it off JD McCoy's hotshot personal coach (and new assistant coach while Mac is out... get well soon Mac!) and Dillon won the game. 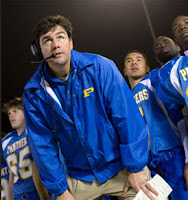 I'm hearing rumors of a Coaching controversy... bullshit. Coach Taylor is only one year removed from State, and the boosters are already thinking about a change!?!?! If Taylor goes... so do I!
Posted by Mr. F at 10:26 AM

I agree- no overbearing QB coaches as head coach. I disagree with Saracen returning as QB 1 (I hear he is nailing coaches daughter)

If riding coaches daughter meant riding the bench as QB1, I guess I'd do the same thing.

Can you please put Spoiler Alert in your post title. Not all of us have DVRs, we have to wait for NBC.com to put the new episodes online.

Spoilers!?! What the frak are you talking about? So am I supposed to post spoiler warnings every time I discuss the latest Mariner's baseball game?

This is a sports blog Sean. Geez. Wake up.

If riding coaches daughter meant riding the bench as QB1, I guess I'd do the same thing.